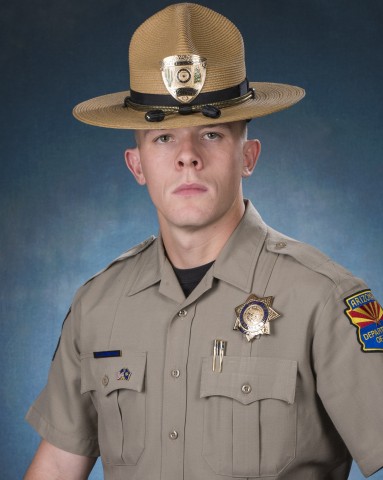 Trooper Tyler Edenhofer was shot and killed after he and several officers responded to reports of a subject throwing objects at vehicles on I-10, near Avondale Boulevard in Goodyear, at approximately 10:00 pm.

Three Arizona Department of Public Safety troopers and two Goodyear Police Department officers responded to the scene and attempted to take the subject into custody. The man resisted arrested and engaged the officers in a struggle that lasted several minutes. The subject was able to obtain one of the officers’ duty weapons during the struggle and opened fire, killing Trooper Edenhofer and wounding another Arizona Department of Public Safety trooper.

The subject was taken into custody.

Trooper Edenhofer had graduated from the police academy only three months earlier and was still in field training at the time of the incident.

If you would like to support Trooper Edenhofer’s family, support seriously wounded Trooper Dalin Dorris and Trooper Sean Rodecap, Click Here. Any Contribution Is Appreciated

If you are a current or retired Peace Officer in the United States and a current or life member of the FOP, you are eligible for the Arizona FOP license plate.
For Members Only

You can pay annual dues here based on application date.

Police One Topics of Interest

Make the right choice… The Fraternal Order of Police.

With more than 330,000 members, the Fraternal Order of Police is the largest law enforcement union in the United States. The benefits of membership include access to the best legal plan available to law enforcement, aggressive employment representation, effective political relationships at the local, state and national level and a reputation for taking care of our membership.